Here are a few ‘large’ (more then two employees) companies (with offices) which are using kickstarter to get the money to run their company (with expenses), while building a game project.  This, to me, is a terrible idea bound for failure.  But I can’t quite put my finger on exactly why.  This sets a bad example for anyone just starting out.  Kickstarter works best when it’s used to fund projects, not companies.  But then on the other hand, maybe funding is funding.

SHAKER
How can I tell it’s a company: Art.  Great, great art.  They have hired and are paying an artist to make their kickstarter look spectacular.  They have a ton of employees: 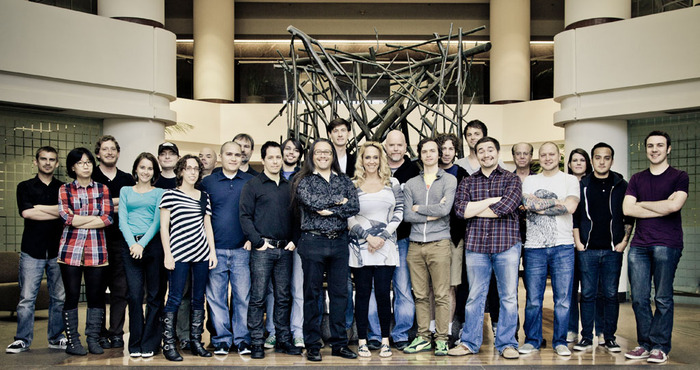 Employee compensation is the largest single cost of a company.  Between salary and healthcare.  All those people in the picture?  That’s a lot of expense.  Although it’s quite possible that some of the people in this picture were let go with the cancellation of Ghost Recon Social game.

Nexus 2: The Gods Awaken
Again, a ton of concept art.  Someone has spent a lot of time (and money), perhaps personal, perhaps company, to create great looking concept art.  Although some of it is reused from a previous title, they also indicate having a large team.  And therefore large expenses.

Double Fine Adventure:
The obvious counter example.  They did really, really well without even naming a project at all.  Their kickstarter sums it up really well “The world of video game design is a mysterious one.”  There are surprise successes, and terrible failures.  Do not expect the same results, even if you put in the same effort.  Even if you could make witty videos, you won’t be able to get the same results.  One thing I notice in watching the videos, Tim Shafer understands that this is funding for a project.

Being but one person there is no way to find all the successful and unsuccessful kickstarter projects, nor determine which ones were funded at what stage.  But what I can say to the beginner, the person like myself looking to complete their first or second project, understand that a Game Idea != Game, and that Project != a company.  Err on the side of caution, and fund a project with a kickstarter.  If the project does well, use the revenue to then start a company.