At practice last week I was asked about the rules that we follow for weapons. Players wanted to know what the lengths are and the impact of those lengths on the rules. Fortunately the rules are fairly standard and should give the general audience an idea of what weapons are usually like. However, if you are not a member of my practice do check with your game system, as some systems can vary quite a bit. 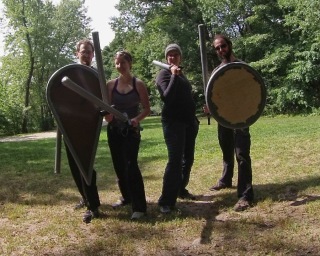 As a new player it’s fairly easy to spot that most Boffer and Latex weapons conform to certain lengths. These standards exist as game mechanics for game play balance not historic accuracy. They have been handed down from one game system to the next for quite some time and as far as I know have origins in the SCA. Most, but not all, larps use similar weapon lengths and skills. Here the 5 common larp weapons.

Dagger – any weapon longer than 12 inches but shorter than 18 inches. The weapon is used in one hand, and does not require the other hand to be free to use.

One handed – any weapon longer than 18 inches, but shorter than 36 inches. The weapon is used in one hand, and does not require the other hand to be free to use. Shields count as one handed regardless of size.

Hand and a half – any weapon longer than 36 inches, but shorter than 48 inches. The weapon can be used one handed or two handed, but the player may not have anything else in their other hand. Sometimes called a ‘bastard sword’.

Ranged weapons – generally there are no length restrictions associated with ranged weapons. Bows should be under 30 lb pull. Do not aim at the head with any type of Ranged weapon. For most boffer arrows you can make due with a 10 lb pull fiberglass bow, so 20lbs or 30lbs are a bit overkill. If you’re using a 30 lb pull bow make sure you do not pull the string all the way back. This can be accomplished by constructing arrows which are shorter than a full draw.

Throwing weapons – Any one handed weapon specifically constructed to be thrown safely can be used as a throwing weapon (more about this in weapon construction rules). Do not aim at the head with any type of thrown weapon. Generally they should be 18 inches or less, but that’s more for practicality than functionality. While it’s possible to build a two handed throwing spear safety, it would be pretty useless on the battle field. Some latex throwing weapons are longer than 18 inches, which is fine, as those types of weapons have no exposed pipe.

Two weapon fighting – Daggers and one handed weapons can be used ‘Two Weapon’ style. This means that a player can hold one in each hand. This could be dagger/one handed, or two one handed weapons. Playing with a weapon in each hand is extremely difficult and takes a while to learn. Some people have a taste for it, most don’t.

You could consider ‘Sword and Board’ as the same classification as Two Weapon. Shields count as a one handed weapon regardless of being a target buckler (12 inch diameter) or a kite shield. Some shields may be constructed with striking surfaces, if so check with a Marshall to make sure it is safe before fielding the shield/weapon.

Generally being shown how to build boffer weapons is much more informative than attempting to learn the rules and steps alone. Fortunately there are plenty of guides and videos online about how to construct safe boffer weapons. If it’s safe for another game systems it will probably be fine for our practice.

If you have any specific weapon questions, or if I have forgotten some specific weapon rule, you can tweet me directly @jspringfied211. You can comment, ask questions, and provide suggestions for this post on my Google Plus feed (it attracts less spam than my website). There is a FB group for the practice.